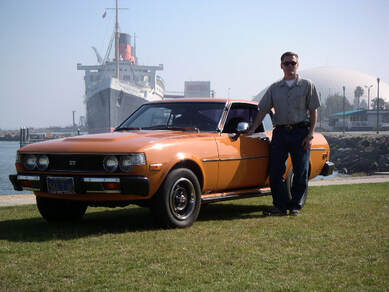 Living the Toyota Life
IMPORTANT NOTICE: Much of the information below is a bit outdated. Toyotageek.com will soon come to a close and be no more, but I wanted to preserve what I created so I have moved, or will soon move, most of that information here. What you see below has been copied and pasted here just as is.
​
Welcome to my world.

What's Toyotageek.com?
Toyotageek.com started as an idea many years ago, and finally came into being in 2006. Over the years, the site has evolved and changed, just as my interests have. However, the overall theme has always been and will always be TOYOTA.

This is where you will find Toyotamobilia: history, stories, toys, brochures, literature, photos,
collectibles, trivia... basically anything to do with Toyota. All Toyota - All the time!

I have a lot planned for the site, but only so much time to do things.  When the site started I was single, and now I'm married. These days life revolves around my wife, our dog, and keeping an eye on my father. So, please be patient, and I will add new material as time permits.

I will be adding new Toyota Tales as they become available - real stories about real people and
real cars.

My eventual goal is to include pages on Toyota history, from the earliest beginnings with Sakichi Toyoda, who started it all with his textile looms, and Kiichiro Toyoda, who founded the Toyota Motor Corporation, to eventually include company and vehicle history up to the early 1970's.

Over the years I have collected of all sorts of Toyota related items, especially brochures and toys.  Eventually there will be pages devoted to those topics. Recently I began working on a guide to minicar shops of Japan, since that is where I get a lot of my mincars. I'll also be adding more minicar / diecast / toy information and I am toying with the idea of including an entire section for Tomica.

Even though my focus is on the history of Toyota and it's vehicles, as well as collecting
Toyotamobilia, I also have pages on more current topics, such as Road Tests and New Car Reviews on current and recent models.

So, please stay tuned, there is a lot more on the way.
UPDATE: September 2019.
My dad passed away in September 25, 2016. That year was rough on him. It all began in January when he tripped and fell over the family dog. He fractured his shoulder and things went downhill from there. He sustained a couple of more falls, and suffered a broken hip and wrist. It wasn't long after his last fall that he passed away. Since that time I haven't put much effort into maintaining my websites, but I hope to get back into the swing of things and I plan on making some changes to the Japanese Minicar Garage. Please stay tuned...